ear-end city housing starts statistics for 2019 recently became available from Canada Mortgage and Housing Corporation (CMHC). For the six largest cities in Canada, by population, this article will examine how last year’s results compared with other years, previous peaks and long-term averages. It will also look at the singles-versus-multiples mix. 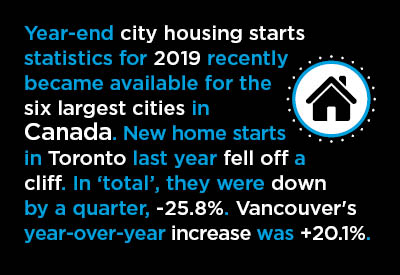 The bottom right chart in the accompanying graphic for Montreal shows the dramatic fashion in which the gap in the shares taken by multiples and singles has grown ever wider since 2002. It has become about as exaggerated as is mathematically possible. Multiple-unit starts in the city in 2019 were 90.6% of the total, with singles at less than 10.0%.

Montreal’s 25,100 units in 2019 may have been relatively healthy compared with most other years this century, but they were considerably below the all-time peak for the city of 42,000 units attained in 1987.

Just the same, 25,100 units does compare favorably with the latest 10-year annual average figure of 21,100 units. The latest 10 years corresponds with the period since the 2008-09 recession.

Statistics Canada publishes a new housing price index (NHPI). It’s for singles, semis and townhouses, but not apartment and condominium towers. Montreal’s NHPI in December 2019 was +6.6%.

For insight into actual house prices in Montreal, one good option is to turn to the median sticker prices for existing homes provided (in a price map at their website) by the Canadian Real Estate Association (CREA). In December 2019, the Montreal median resale home price was $382,000, +9.4% y/y.

A Hot New Homes Market in Ottawa-Gatineau in 2019

As in other major urban centers in Canada, housing starts in Ottawa-Gatineau are increasingly leaning towards multiples as opposed to singles. In 2019, the former comprised 73.2% of the total and the latter, only 26.8%.

Statistics Canada’s new housing price index (NHPI) for Ottawa-Gatineau registered positive increases on both sides of the river separating Quebec’s residences from Ontario’s. New home prices on the Quebec side were +3.2% y/y. On the Ontario side, they were livelier, at +7.2% y/y.

In addition to its new homes price index, which is monthly, Statistics Canada also publishes a residential property price index (RPPI) series, which is quarterly. The RPPI has an expanded scope of coverage versus the NHPI, as it includes condominium and apartment towers.

In Q3 2019, the Ontario side of Ottawa-Gatineau had an RPPI figure for new condos and apartments that was +16.3% year over year, demonstrating a notable strength in demand for such dwellings.

Housing Starts in Toronto in 2019 Plunged

New home starts in Toronto last year fell off a cliff. In ‘total’, they were down by a quarter, -25.8%. Multiple-unit starts were also lower by about a quarter, -24.2%, while foundation work for new single-family structures retreated by more than one-third, -34.4%.

In a clear demonstration of Toronto’s giant-sized housing market, however, the city’s total number of starts last year, despite a 25.8% drop, was still the highest in the land, at 30,500 units compared with second-place Vancouver’s 28,100. Montreal was third with 25,100 units.

Toronto’s population last year rose to an astonishing degree, by 125,000 individuals, and they all needed living quarters. The longer-term outlook for Toronto housing starts can only be upbeat.

Multiple-unit starts in Toronto, as a share of ‘total’, have now climbed to 86.2%. No wonder construction cranes, building high-rise condo towers, can be seen everywhere in TO, as the city is known by locals.

Finally, as for the price level of residences in Toronto, CREA has calculated a median figure of $819,700 for resale homes, +7.3% y/y.

In 2019, Calgary’s housing starts were 11,900 units, an almost exact match for the city’s annual average of 11,800 units over the past ten years. Worth noting is that the past ten years also corresponds with the period since the 2008-09 recession.

Multiples as a share of ‘total’ in Calgary last year were 71%. Multiples have been clearly predominant versus singles in the city since 2014.

Edmonton’s latest annual level of housing starts, at less than 11,000 units, was well under the 17,100-unit record high attained four years ago in 2015 and, also, way back in 1978. (It’s remarkable that Alberta’s two primary cities, Calgary and Edmonton, possess the same annual peak levels of housing starts, 17,100 units.)

Multiples as a percentage of total unit starts in Edmonton last year were 62%. Edmonton remains the only city among Canada’s six most populous where singles are still competitive with multiples for dominant portion of the total.

Statistics Canada’s new housing price index for Edmonton in December was -2.2% y/y, the same as for Calgary.

Vancouver managed exceptional strength in total housing starts in 2019. The city’s annual level last year of 28,100 units was a new record high, surpassing ‒ although only barely ‒ the previous peak of 27,900 units achieved in 2016.

Multiple-unit starts in Vancouver in 2019 were 88% of total-unit starts. Vancouver has a long history of multis taking a greater share of all starts than singles.